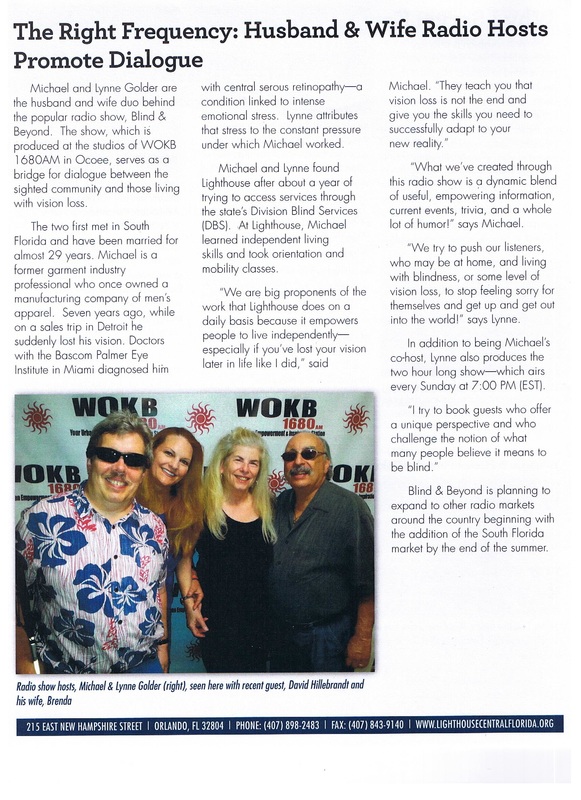 Article written in the April, 2017 edition of the American Council for the Blind Braille Forum:

Michael and Lynne Golder remember standing in line at a local food bank in the Orlando area, just two years after owning a highly successful company in the garment industry. Now, after going through a roller-coaster ride over the past 8 years, the two work in radio and co-host the “Blind & Beyond Radio Show.”

“The show serves as a bridge between the sighted community and the visually impaired and blind community,” Michael explains. “We want people to know that there is more to life than blindness. That’s why we always play the song ‘Ain’t No Stopping Us Now.’”

They began airing the weekly broadcast on Sunday, April 3, 2016. Previously they had hosted a similar syndicated show called “Blind Matters.” The current program airs live out of a studio in Ocoee, Fla., a small town on the outskirts of Orlando. It runs Sunday evenings from 7 to 9 p.m. Eastern time on 1680 WOKB-AM. It can also be heard online at www.wokbradio.com, on the TuneIn Radio mobile app, and on the WOKB mobile app. The show is also available by phone at (518) 712-0057. Podcasts are available free at www.blindandbeyondradioshow.org. And you can call into the show live at (407) 894-1680 to add your two cents about any relevant topic.

The show offers a variety of content. From interviews with movers and shakers in the blind community, to inspirational quotes and poems, to trivia, the word “beyond” is important to remember because of the unique mix the show has to offer.

“It’s all about the word mindset,” Michael says. “I speak passionately from my heart that blind people can do anything. The only question is if they hold themselves back. You have to be a risk taker. If you fall down, you have to get up. If you are passionate, focused, and persistent, you should never be held back.”

In addition to the Golders, producer Chris Shaw, who sits behind the glass, is the true heartbeat of the program from a technical standpoint. You’ll hear an array of guest co-hosts each week, including FCB members like Sheila Young, Gary Sinclair, and Charles Brooks.

Michael has a reputation for his affection for ‘50s and ‘60s music, particularly hits by Ricky Nelson, Bobby Darin, and Paul Anka. So, if you listen to “Blind & Beyond,” there’s a good chance you will hear a song from this era when he asks listeners to identify an artist during a “name that tune” trivia segment.

“When I was a kid, my parents owned the first record distributor for Motown music,” Michael recalls. “My father’s business partner was Jocko Henderson, a well-known syndicated black DJ. At age 14, I got involved in the record business as a salesman. I also danced many times on American Bandstand where they nicknamed me ‘rubber legs.’”

Michael, originally from Philadelphia, and Lynne, who calls herself a Jersey girl, joined the Greater Orlando Council of the Blind in early 2012 and have been members ever since.

“It’s a really nice group,” Michael says. “We are very proud members and try to get to the meetings when we can.”

The couple also does full-time sales work for some radio stations in Orlando. Michael is Vice President of Advertising for WOKB and Brazil Radio AM and FM. Along with taking her husband all around central Florida to meet with potential on-air advertisers, Lynne writes and records the commercials for the stations.

“Lynne takes me to all types of businesses – stores, restaurants, car dealers, and even martial arts centers. I go in and try to sell advertising spots on our stations. I enjoy the competitive edge and challenges to this work. I’m a type A personality, and I always like talking to people.”

Michael previously owned a men’s clothing company for over four decades, where Lynne worked as the head designer. After suddenly losing a good amount of his sight while on a sales trip in 2008, ophthalmologists at Bascom Palmer Eye Institute in Miami diagnosed Michael with idiopathic central serous retinopathy. However, he has received varying opinions on the ultimate cause of his vision loss and has undergone a few procedures.

“Right after I went blind, I met with a potential business partner. He immediately said, ‘Michael, you’re blind. Why would I want to go into business with you?’ He asked how many buttons were on his 3-button suit. When I said ‘three,’ which was correct, he said it was a lucky guess. So, this wound up being the end of our business, and I was on the hook for millions.”

Fortunately, as luck would have it, his wife was looking out for him – in more ways than one – and spotted a small job posting that would lead to a future successful career for the couple.

“So one day, Lynne saw an ad in the paper for a radio station looking for a salesperson. She drove me there on gas that we couldn’t even afford. The station manager, Carl Tutera, said he didn’t care about my visual impairment and decided to give me a shot because as long as I had a mouth, I could do the job.”

Michael would later get an hour-long show on The Big 810 AM in Orlando. This was the birth of “Blind Matters” in April 2012. This show would eventually expand to three hours and several major markets around the country. It was Budweiser that served as its original sponsor.

Lynne spends many hours each week researching potential guests, content, and advertisers for the broadcasts. And Sunday night certainly comes around quickly each week.

“My favorite thing is planning the show each week and seeing it come to life,” Lynne says. “I tell Michael that it’s like passing an exam. It’s similar to working in the garment industry when I would imagine a piece of clothing and then see it manufactured. But the minute I walk out that door on Sunday night at 9:30, I’m already planning the next show in my head.”

Lynne says the loss of Michael’s vision and the involvement in two radio shows about blindness have both been big eye-openers for her.

“Meeting blind people has changed my life,” she says. “We did not know one single visually impaired person before. I now think twice about things much more than I used to, and I try to accommodate people. For example, when working on the website for our show, I always take into account the fact that everything has to be accessible.”

Michael has big dreams for the future of “Blind & Beyond.” “I want this show to become bigger and get into more cities. I also want more people to get involved with the show to help spread our positive message all across the country.”